Quad is not a Monster. This covers 20m through 10m

My first real antenna experience was with a 20m 3el Yagi. I was fascinated with Quads and wanted to build and try one at some stage of the game.

Having More than 35 years of experience in the Field of Amateur Radio, I have published many articles in prestigious international publications like, QST, CQ-DL, NCJ, Six-News etc.. Here in this web site, these write-ups are intended to give you knowledge about my designs and projects related to the hobby. The articles about foreign HAM activities are intended to share my experience.

The simple reason is that I wanted to experience it by myself. I have been designing, constructing & working with yagis for the last 5 years of my ham radio life. A good example is the 3 el monobander yagi for 20m and 4 el monobander yagis for 10m & 15m.

Perfect. Gives what you expect and easy to handle.. cheaper to construct.. easy to tune..mechanically stable…and many more.. But, there was a dream from the start in me to construct a quad which I thought was a ‘Monster’.

Monsters don’t give you much more than you expect. I realized this only after building one Quad on my own efforts.

Huge antenna.. extremely difficult to construct, handle and mount, even more difficult to tune. But once you overcome all these, it will be a better one among others. My quad is a diamond shape 2 el 5 band system. Gamma matched each element is switched through a relay box. Single feeder comes to the shack.

The construction of the quad took nearly 3 weeks. Two elements were made on the roof. This original design is a 3 el 5 band quad. But I decided to go for only Ref- Driven configuration completely ignoring the director. Yes, this is a violation of design rules but not for ever, because the 3rd element is under construction.

The initial thing was to clear some space to put this up. I had to remove my 2 monobanders for 10m & 15m from the tower. (Picture Above)

Then I have put the 2×2 square Aluminium boom on the tower and connected the Reflector after lot of efforts during the Noon @ 30C temp. Thanks to Kapila and the team for the help . Getting the quad element to the boom is much more difficult than getting a 4 el yagi to the tower top !!

When I finished putting up the driven element also, the diamond quad looked like this (below); No feeding system /Matching system connected. The Bamboos were not treated or coated. Simple reason was to minimize the cost of construction. The antenna in the background is my 20m full size 3 el monobander which is there for the last 4 1/2 years. The diamond quad spreader arm comes closer to the roof making the life easier for tuning.

Then came the hardest part..installing the gamma matches for each element and tuning. This took nearly 2 weeks to get a satisfactory tuning.

The Bamboo spreaders are sagging and bending when they get dried under tension. That doesn’t make a big impact on the antenna performance. Then the antenna with completed gamma boxes looked like this

What you see behind the quad is my homebrew 3el yagi on 20ft boom. It’s another super performer. It’s fed using a gamma match and mounted on a 35ft tower.

In the quad, the gamma boxes for each band are mounted on the vertical bamboo pole as can be seen in the above picture. The Gamma capacitor is in a homebrew PVC water pipe container. the spreaders are all Bamboo. Elements are 18 SWG copper wire. Rotator is a TV type ‘Channal Master’ rotor. As you can see, the boom is waiting for the 3rd element to come . 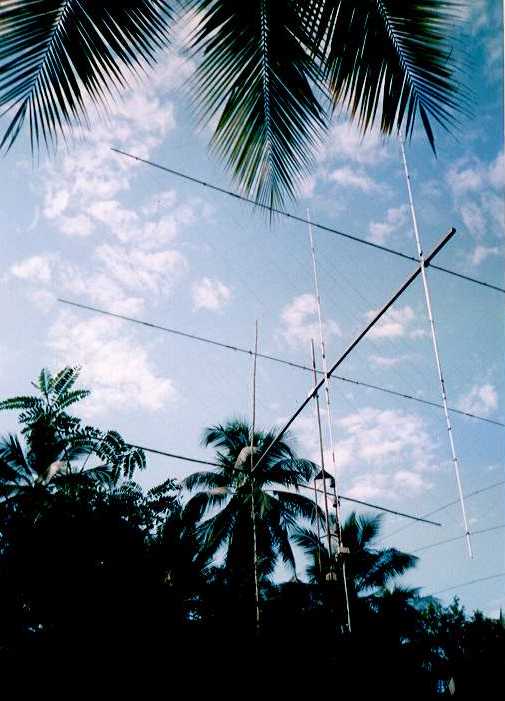 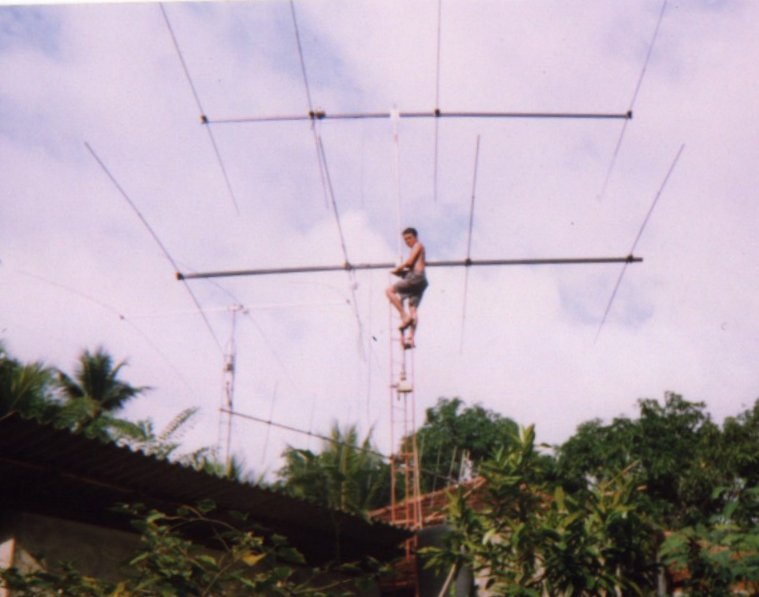 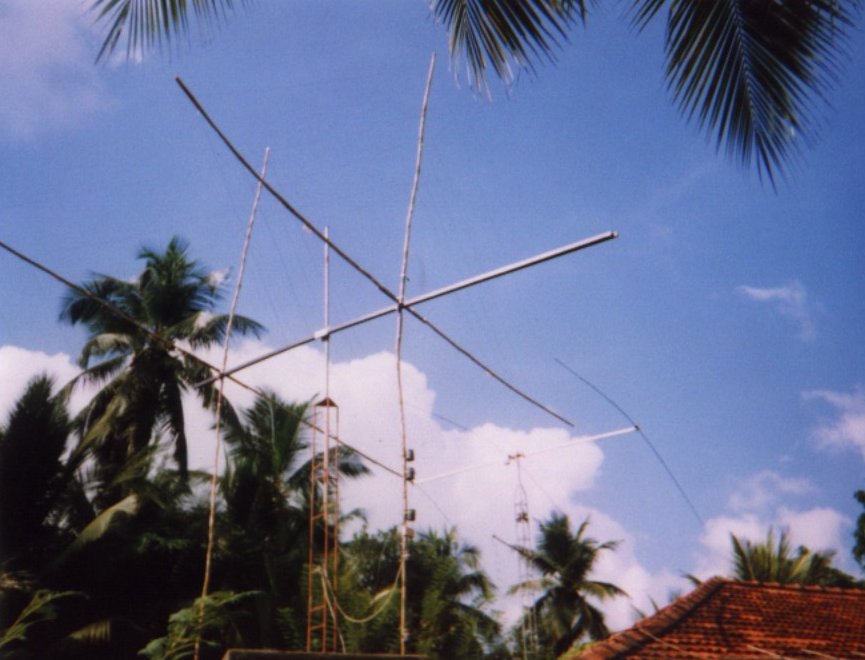 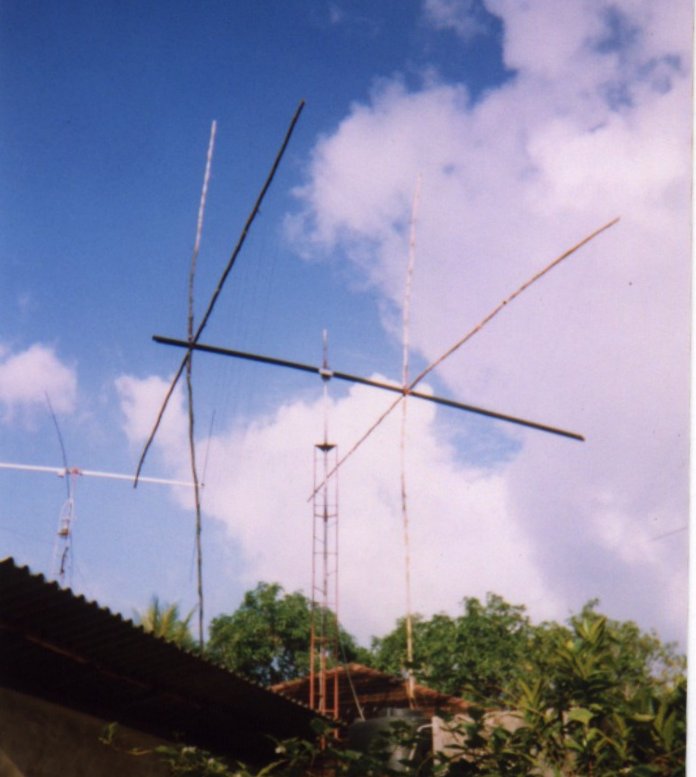 The Date 17th December 1999, 8 days before my 26th b’day. I have installed the 3rd element. This time the director and the driven element was constructed using sectioned Aluminium tubing . It looks great like it looks in the book. Now the reflector is the only element having bamboo spreaders. I might have to change it too. But I left it to the future . A special note of thanks to all my village friends who came for erecting the big baby quad.

x : Side length of each element (Total length is 4 times the side length)

y : Distance from the centre of spreaders to the ‘element to spreader’ attaching point.

Theoritically, if one uses my method of five gamma matches, it will have to be possible to tune all the bands for 1:1. But practically it is impossible. Because when you tune a band 1:1 and then tune another band, the first element will be detuned. Therefore you have to come back and retune it which causes the next one to detune. Therefore I think, always you get a compromise and not a perfect match. Finally after 3 days of hectic tuning, I ended up with 2 bands perfectly tuned( 10m & 15m) and 3 bands with SWR < 1:2.

Now, finally it is a complete 3 el 5 band structure. The gain is superb but f/b is not very impressinve like a monobander yagi atleast for this design.

If you need further details, please don’t hesitate to contact me.